Angelina is the front woman of project Terra Viva,  a 5 piece band based in South East London born from Angelina and bassist Devid Dell’Aiera to discover their Italian roots and mixing their unique sound with a London twist. The social and political topics touched by their lyrics are delivered by their music aimed to make you dance with infectious grooves that span from gipsy to Italian folk, from jazz to rock.

Born out of cinematic soundtracks, the music of Selkie creates a unique fusion of Celtic sounds, rock elements and employs influences of folk music from all over the world. Born by composer and multinstrumentalist Alex Paton and singer songwriter Angelina, with lyrics inspired from Irish folklore to brexit and delivered in many languages, there is something for both music and story lovers alike in this euphony of original music. 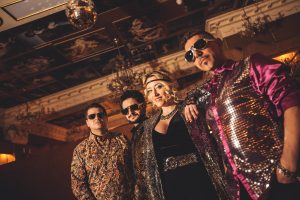 London based funk band formed by the love of funk music, Groovelution plays 70s, 80s hits from the soul, disco and funk era to more contemporary songs. Formed by Angelina on voice, Lux on guitar &  Bvs, Ale on bass & BVs and Matteo on drums, Groovelution performs at weddings, public and private functions and ballrooms with infectious grooves that will make you dance the night away! 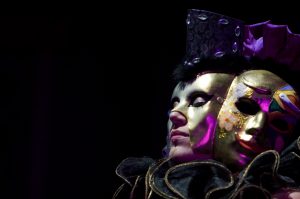 MasQua is a six-piece ensemble of collaborative musicians  who met and became friends at Goldsmiths University of London. Founded by Angelina to express her songwriting and strong artistic vision, MasQua is wide-ranging in their diverse influences, musical experiences and multicultural backgrounds (British, Italian, Burkina Faso and South African). MasQua members use their strong musicianship and stage presence to create live performances that are both intimate and effective.
MasQua mix homegrown live electronics with acoustic elements touching on pop, folk, rock and madrigal with a splash of theatrical performance.
MASQUA: YouTube   SoundCloud    Facebook

‘Afrodizzie is a collective of musicians sharing life lessons and Afrobeat.’
At its core Afrodizzie is a group of friends that share in this passion for music from ‘the dark continent’. The collective includes some of the most talented young musicians from the South and East London music scene as well as former Egypt 80 (Fela Kuti) musician Rotimi Afariougun.
In 2014 Afrodizzie released they debute album “Masta Copy” (Kanuga Records) and the Single “Solid” (CME Records).
AFRODIZZIE:    Facebook     Soundcloud